If you’re like me, you’re going to be scared as hell on the first day. What’s the teacher like? What about my colleagues? Are we gonna take a test?

It would better if you got there at around 9.45 (if you should start at 10). Try to sit as close to the teacher as possible. I didn’t know where would sit, so I accidentally chose to sit across the table from him, so he cannot always hear what I’m saying… that may be because my voice is too low. If you’re brave enough to shout in German, you’re good wherever you may sit. The teacher usually sits at the table next to the black door thing.

No test. But you’re gonna have to introduce yourself, just as you would during the FSP. Do not mention your age!! For instance: “Hello! My name is… / I am Dr…, I come from …land and I graduated from med school in … (country+year). I’ve done … clerkships in… and now I’m here :D”

You’re going to need a notebook and a pen. You’ll receive a folder from the teacher. A good idea would be to bring a backpack with you.

I find the teacher not so “authoritarian” :)))))) He has some very strong ideas, but I don’t find them ridiculous. You’re expected to conduct the anamnesis (medical history) just as he tells you to. The reason behind it is fairly logical. After you’ve asked the exact same questions over and over again, you’re gonna learn them by heart. BUT PLEASE DO NOT TRY TO LEARN IT FROM THE FIRST DAY. The teacher hates that. One must always recap. )))

You’re gonna receive a list of words. You only have to read those over and over again.

The homework will consist of two clinical cases. Read them and try to imagine you’re the physician and then the patient. What questions would you ask as a doctor? What would you answer as a patient? If you have time, write down these things.

EXTREMELY IMPORTANT! At school one must speak only German. I already knew that from Mr. Karbownik. And yes, there are other Romanians there. And yes, they wanted to speak to me in Romanian. At first I pretended I couldn’t hear them so well, so I told them so in German. I might have been a bit rude, but I didn’t want to upset the teacher. They spoke to each other in Romanian during breaks, aaaaand the teacher heard them. He simply said: “In this classroom one must speak only German”.  But did they get it? Nope.

After school I went to Seoulkitchen Restaurant and had some Sashimi. Not the best choice, but I guess one must try (almost) everything at some point :)) I love sushi… hmm… but sashimi… not really. 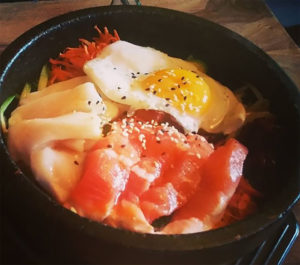